I watched the 2015 film, The Martian, for the first time last night. Aside from being a riveting story, albeit a bit silly at the end, the one thing that struck me was the fragility of life in a hostile environment. 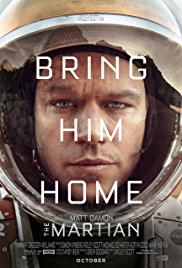 I don’t want to spoil too much of the plot in case you’ve not yet seen it however, the protagonist plays an astronaut stranded on Mars who has to learn to survive. There’s not very much atmosphere, no water (in the film), the temperature is extremely cold at night, the “soil” is barren and lifeless, and all in all the planet is not tuned to life as we know it (Jim…)

It struck me that there are some significant comparisons with potential outcomes the Earth. As human animals continue to sterilise the planet through our use of pesticides, herbicides, GM crops, inability to stop dumping our crap in the Earth, Sea or Sky, or to stop digging up the remains of animals and plants long dead and then burning them to fuel our lifestyles while creating climate change, we are in danger of creating non-habitable zones on our lovely blue planet.

Watching the character, Mark Watney, try to survive in the hostile environment demonstrates quite clearly how ridiculous human behaviour towards our own planet is. As we create wastelands, knowingly or unknowingly, we are ensuring that the remaining areas are pushed harder. As we push harder on those remaining areas, they start to suffer and collapse. There is a vicious cycle, trigged by human action, that is grinding down our ability to survive.

The concept of thinking about the impact of decisions on a seven generation basis is not new but it is almost never considered. Friends of mine continue to campaign for the rights of future generations – an essential right that almost never gets airtime. How can we possibly survive in the long term if the impacts of decisions are only considered in relation to the hear and now / next few years?

The recent publication of the “Hot House Earth” scenario within a hundred years or so, along with a whole host of other information now surfacing, suggests our ability to prevent runaway climate change is rapidly fading but that doesn’t mean that our decision making should remain short term survivalist. If anything, we must learn that the short-termism is to blame for our predicament and that we won’t solve the problem by using the same type of thinking that got us here.

It is time to think 200 years ahead with every decision. How is what I’m considering going to play out for my 4 x great grand children? Most decisions we make won’t affect future generations but some will. Knowing what we are doing to our descendants is an ethical duty that most humans seem to have forgotten.

One thought on “The Martian – life on a dead planet”

This site uses Akismet to reduce spam. Learn how your comment data is processed.

Who should we speak for?

We speak for the land, sea and sky.

We speak for the animals and the trees.

We speak for the oppressed and the dispossessed.

We speak for those who can’t.

We speak for ancestors and for future generations.

We speak as Druids.